Yesterday, I saw that Cassey from Blogilates wrote a post to her readers after several of them wrote negative comments regarding her choice of models for her new fitness line. She is launching her own fitness apparel line, BodyPop, and posted a picture of the 2 models who were doing a photo shoot for her. Readers commented that they were upset she didn’t use “real women,” so she addressed this in her post, “What does a real woman look like anyway?”

I’d like to know that as well. I think that as more and more people have started getting fit and healthy, there has been more body shaming going both ways. This was the reason behind one of my posts about “Strong is the new skinny.” Typically, when we think of body shaming, we think of people insulting or judging those who may be curvier or a bit overweight. But I think Cassey has a point here. How is not bashing these two girls and saying they’re not “real women,” also not body shaming? Such as the phrase, “real women have curves?”

Why is it that because they are fit or skinny they aren’t real women? My sister, for example, is naturally slender. She works out regularly too, and is just naturally tall and thin. I’m sure she would be upset if she read a comment saying she’s not a real woman.

Cassey made a point about the obesity problem in the US, saying that the average dress size 50 years ago was a size 4, and now it’s a size 14. Then she said:

Now that we’ve established that the average person has gotten bigger and heavier throughout the years (due to lack of movement, the increase of fast food, larger portion sizes etc.), we can talk on a level playing field. Are you mad that I didn’t choose to showcase models that represent our “average US woman” which really is a huge red flag that something needs to be done here? Today over 30% of the world is overweight or obese.

I think I’ve written about this in the past before too. The US has an obesity problem, yet it seems people are afraid to point that out to others. I understand that there are many people with medical conditions, but there are many who don’t have medical conditions are are obese due to not exercising, not eating right, and more. Why is it that we say women should have curves and what not, when this isn’t necessarily healthy in some cases?

Like I said, I understand looks aren’t everything. Just because you’re overweight doesn’t mean your unhealthy and just because your thin doesn’t mean you’re healthy. But sometimes it seems like we almost praise being overweight. We are okay with it and complacent with it. “Women should have curves so it’s okay.” It that really a healthy mentality?

I saw a lot of different comments on this post. Many agreed with Cassey, and also claimed that since it’s a fitness apparel line, why wouldn’t she use fitness models? Many also said that using fitness models is good for motivation. I mean, I know I’m motivated when I do a workout video and see all those lean women! A few others were still disappointed, such as this comment:

I’m not disappointed because I don’t like thin and tall women modeling at all. I’m disappointed because I was expecting something different. Having followed your blog for a long time and reading how you are equally against unrealistic body expectations set by media and unhealthy habits being overlooked, I was expecting you to use not-the-typical-model-type-of-body for your line. And wanting that doesn’t mean I was expecting to see an obese/underweight/unhealthy woman as it’s obvious that as a fitness line you want to use fit healthy models.

I guess the point of this post was to ask, really, what is a real woman? Why is that even a phrase/terminology?

What are your thoughts on this issue?

Do you think we, as a nation, are too lax on obesity issues?

22 Add a comment
Filed Under: Thinking Out Loud Tagged With: body shaming, obesity, real women, strong is the new skinny
09-04-2013

Thinking Out Loud: “Strong Is The New Skinny” You’ve all seen this quote. It’s been everywhere lately. I loved it when I first saw it, and thought “Yeah, go strong girls!” But is it really the best message to send?

I started thinking about it more when I read this article on HuffPost Healthy Living. The author states:

In the phrase, “skinny” is something to be sought after. Something that’s good. And now, in order to be accepted and seen as beautiful by society, you need to be strong — with visible muscles and the ability to do lots of push-ups and dead lifts and pull-ups. But is this really the message we all want to be sending?

There has been more controversy lately regarding “fitspo” or “fitspiration” where people post quotes such as this one, or pictures of girls they aspire to be. But is that really inspiring? Sometimes I do look at stuff like that on Tumblr or Instagram for motivation…but at the same time, is it causing us to be unhappy with ourselves and what we look like?

Everyone is different, and some of us put on muscle more easily than others, just like some of us are naturally more slender. Does this mean then that non-muscular people are now not as attractive? That they need to change, even if they are living a healthy lifestyle?…Now they get to the feel the pressure that “non-skinny” folks have felt for years, chasing after what could possibly be an unrealistic appearance?

While I think it is great that more and more women are lifting, and not afraid to lift heavy, we should remember why we are doing it to begin with. To feel stronger…to feel healthier…to push your body to it’s own limits (and not compare your numbers to others).

You might look at someone and think, “I wish I looked like them.” I do it all the time! I wish I had more abs…I wish I had stronger arms…but at the same time I remember what my body has done for me. It’s training for a marathon. It has run countless miles. It IS strong even if it doesn’t look strong.

I’ll leave you with the final quote from this article which I love:

What do you think about “Strong is the new skinny?” Do you find motivation from others, or do you sometimes get sucked into the comparison game?

In the past year or so, I’ve steadily been gaining weight. Now I’m 10 lbs. heavier than I was a year ago. But I’m ok with it…in fact, I’m even happy about it. Why?

Because those are 10 lbs. of muscle baby!

A month or two ago…still working on getting some biceps!

My body fat % has stayed the same throughout this entire time, which means the weight I gained is not fat. Woo hoo!

This is the exact reason why you can’t rely on the number on the scale to measure your progress. If I hadn’t known my body fat percentage, it would be so easy to beat myself up for gaining 10 lbs.

I also know it’s muscle I gained because all of my lifts have gotten stronger and heavier. I am at my personal best for deadlifts, squats, rows, lunges and more! My body has been getting stronger, and in turn, building muscle.

Ladies, don’t be afraid to lift heavy or work towards lifting heavier weights! You will gain muscle mass and lower your fat percentage as well. And you’ll look pretty awesome at the gym

Lastly, don’t let the number on your scale dictate anything. In fact, don’t even weigh yourself! If you have access to a trainer or gym that can do so, get your body fat tested. It will give you a way to track your progress in a way better way than the scale does. If you can’t get this done, then use a measuring tape to measure certain parts of your body (arms, legs, belly, hips), and if the number is going down, it means you’re losing fat.

I’ll leave you with this quote, which I love: 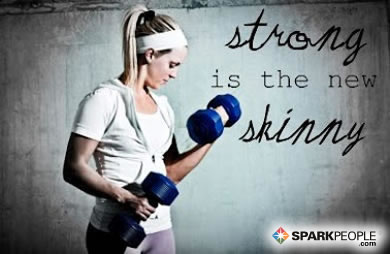 Have you gotten your body fat percentage calculated? Or do you use other methods to track your progress?